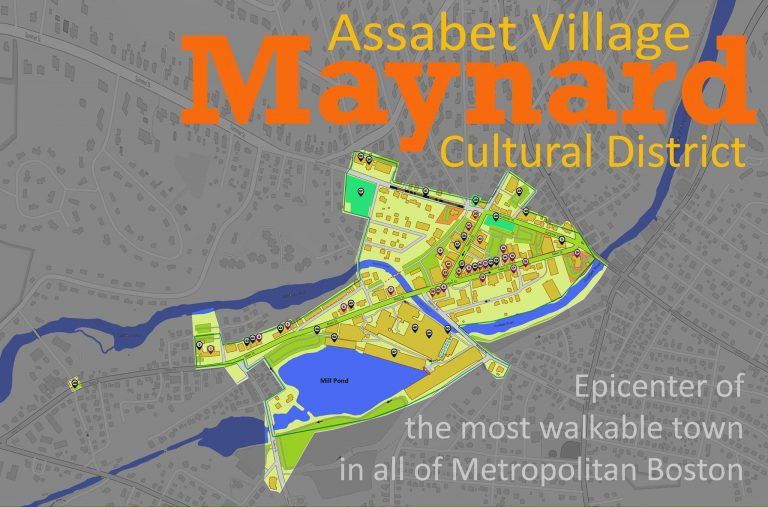 Please visit our Facebook Page and see all of the great things going on in the District!

Just after noon on Thursday, March 23, Maynard Cultural Council Chair Tim Hess, received word that the application has been accepted. The district, which will be known as "Assabet River Cultural District," encompasses all of Downtown, the Mill and Main campus, Art Space, the library and the Fine Arts Theater, among other destinations.

"This designation is a tremendous boost to Maynard's solid reputation as a cultural destination," Sweet said. "Maynard is very fortunate to have such an abundance of cultural amenities to build on. The extraordinary effort that Tim Hess and the Cultural Council put into this effort is something all of Maynard should be very proud of."

Sweet went on to point out that when he heard the news of Maynard's approval, he was coincidentally meeting with the leadership of the 495/Metrowest Partnership - a public-private regional economic planning organization. Sweet noted that partnership's executive and deputy director were "thrilled" with the news and both emphasized the valuable role an active cultural environment plays when businesses are looking for a suitable location.

Alluding to a standing-room-only crowd at the Boston Bean that met with the Massachusetts Cultural Council inspection team in November, Nemser added, "The enthusiasm of the community, the outstanding participation of our businesses, the leadership of Cultural Council and support from Town Hall clearly demonstrated the level of support Maynard has to offer the Massachusetts cultural district program. What this designation does is provide a level of cohesion among the cultural, arts and entertainment community. That cohesion helps solidify Maynard's identity as a regional destination."

Maynard's Cultural Council will serve as the Board of Directors and is expected to schedule a stakeholders meeting in the near future.